I wrote last week that my singular mission was to work on Panoply (multiple newsletter support) and get it to a dogfood-ready stage. Lo and behold: 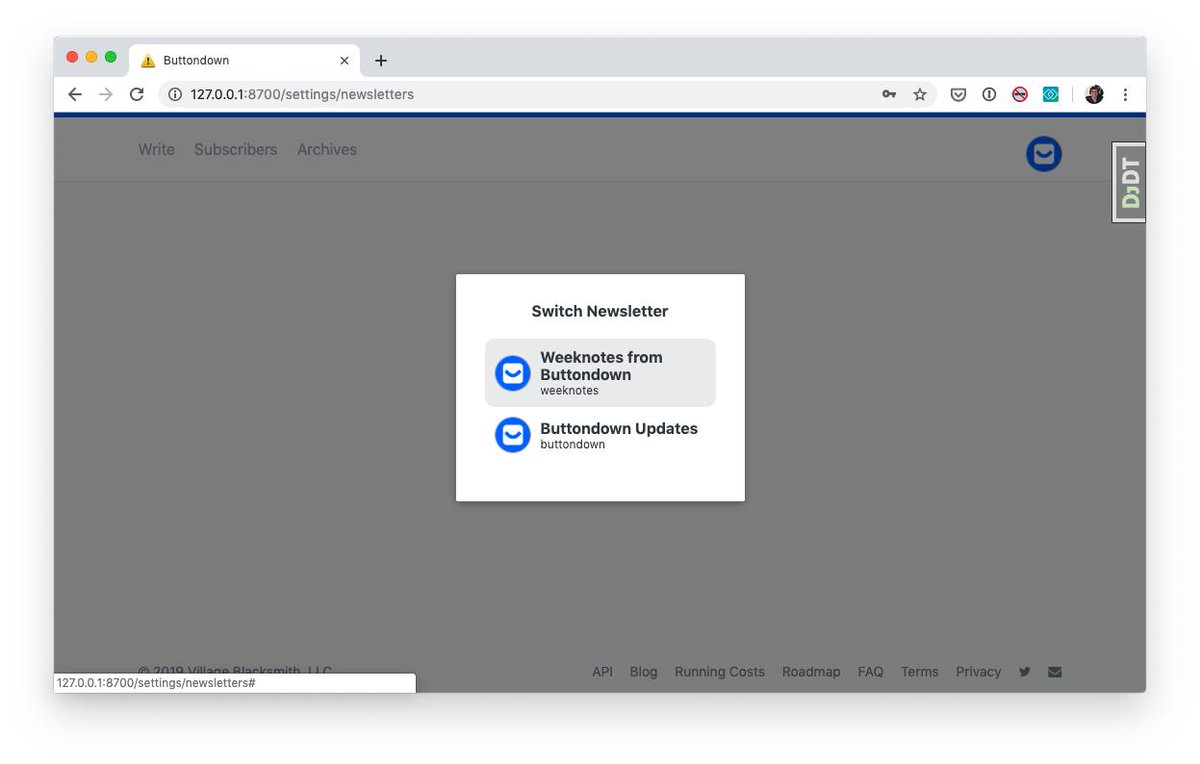 Coming soon(ish) to a tool near you — multiple newsletters per account!

I am in fact sending this newsletter through my account which has Panoply enabled. 1

Approximately 10% of the time was spent on delivering the thing that was in that screenshot: a modal with all of the different newsletters for a user, and then a tiny backend endpoint to change the “active” newsletter to the thing you click on. This was easy and painless: I had, in a rare feat of foresightedness, planned out the necessary database changes over the past few months, and done all the legwork in migrating the plumbing, so that the PR to “create” Panoply was only around one hundred lines. 2

The vast majority of the work was instead spent on a much less fun but no less important side of the work: revising the front-end user model, changing the Javascript that governs the app from assuming that any “user” object has a single corresponding “newsletter” object to completely decoupling the two.

This was something that wasn’t strictly necessary (you’re still only ever looking at one newsletter at a time!) but felt right to do. When the choice I have as a developer is either “spend five hours revising this long-standing technical assumption” or “spend two hours building out a lot of janky verifications & edge-case handling”… well, I can’t say I always choose the former, but here it was the right option.

This isn’t something that can really be caught in how I forecast work, which is why I am trying to shy away more from providing estimates to folks. Sometimes I want to spend twenty hours on something that I can spend three hours on; sometimes the opposite is true.

Even typing that out — I might end up deciding that multiple newsletters is a premium feature — is a reminder that I’m overdue for a re-examination of my business model, which is essentially unchanged since launch. I don’t foresee the thresholds model ($5/mo/thousand subscribers) changing, because that has a scaling elegance that I really enjoy, but “Buttondown for Professionals” is slowly getting subsumed to become just “Buttondown with a custom domain”.

A thing I have been toying with is all premium-y features (API, analytics, custom domain, paid newsletters, multiple newsletters, etc.) for a slightly lower monthly price point ($19?) that I could be pretty aggressive about upselling into annual subscriptions ($199!). I am… pretty bad at thinking about pricing, so we’ll see.

As mentioned last week, I spent the past three and a half days ensconced in the Portland sunshine. I missed forty-seven emails, a couple alerts, six Twitter DMs, a GMail outage, and a lot of development time.

It was also the first truly offline vacation I’ve had in a while, and it was glorious. Shifting back into work mode is always a little rough, but it reminds me of how fortunate I’ve been that most of Buttondown’s users and customers are extremely nice. I’ve had two people already say that they hoped I had a good vacation; I had one say that they were happy I hadn’t responded because it meant I was finally getting a break.

In light of the whole “you can’t measure what you don’t track” thing, I really want to write a small script around the Gmail API to track some customer service KPIs based on my daily email sending & response rates. This might become a self-defeating exercise — especially given that I don’t track anything right now particularly well — but I think it would be a revealing experiment!

This is a truncated work week — and I’ll have lots of other things going on outside of Buttondown as well — but my only two goals are to get Panoply out into the wild and to catch up on my inbox.

You just read issue #8 of Weeknotes from Buttondown. You can also browse the full archives of this newsletter.